Ampac wanted to ensure that their newly developed Emergency Warning Control and Indicating Equipment (EWCIE) was complaint to both Australian, and European, standards. Successful testing and certification from LPCB has expanded international business opportunities for Ampac.

At Ampac, we’re on a mission to provide the most effective fire detection and evacuation solutions in the industry. We want our customers to feel confident knowing they are partnered with an industry expert providing them with a system that will save lives and minimise the damage caused by fire.

Ampac – one of the largest Australian manufacturers and distributors of fire detection and alarm systems for commercial, industrial and multi-residential complexes – is dedicated to preventing loss of life and catastrophic damage caused by fire. They aim to be the Australian market leader and undertake continued innovation to differentiate themselves within the industry.

AS 2220.2, the Australian Standard for Emergency warning and intercommunication systems in buildings released in 1989, is due to be replaced by the AS 4428 range of Emergency Warning and Intercom Standards. With this in mind, Ampac wanted to be one of the first manufacturers to introduce a system compliant to these new Australian standards. To provide their system to the international market, Ampac also wanted to ensure the system they developed attained certification to European standards. Ampac designed the EvacU Elite, their next generation of Emergency Warning Control and Indicating Equipment (EWCIE) with a fully integrated Emergency Intercom System (EIS), to meet the latest applicable Australian Standards, AS 4428-16 (Grade 1), AS 4428-4, AS 7240-4 and the European Voice Alarm standards, EN 54-16 and EN 54-4.
BRE had not previously undertaken testing and certification of EWCIE to Australian standards, however with extensive laboratory facilities for fire safety testing, they were one of the first UKAS accredited organisations for these standards.

Initially, an initial gap analysis was undertaken to determine the similarities between Australian and European standards. A dedicated testing programme was developed, and once testing had commenced, Ampac were particularly impressed with the testing programme undertaken by BRE’s dedicated test engineers. Commenting on the testing procedure, Adam Skellham, Product Manager at Ampac, said “Throughout the project, LPCB provided clear and updated schedules and constant communication which provided clear testing progress”.

The rigorous testing and certification journey was finalised in early 2022.

Through certification by BRE to Australian and European standards, Ampac demonstrated the quality and reliability of its system, and overall commitment to product quality, to its customers and the wider market. Third-party certification itself has allowed Ampac to provide independent confirmation of their system’s effectiveness, and the collaboration means that BRE has now undertaken testing and certification of EWCIE to Australian standards.

Commenting on behalf of BRE, Eman Mattie-Suleiman, Technical Development Director (FDET), said “This project was challenging in many ways, from assessing the tests and requirements, assessing the risks, and preparing the laboratories facilities to accommodate such large equipment with high electrical parameters. However, it was very interesting because it provided the opportunity to test new products to new standards. The working relationship with Ampac has been positive, with prompt communication throughout the project”.

Ampac have been working with BRE since 2009 and envisage that they will have further products tested and certified in the future. 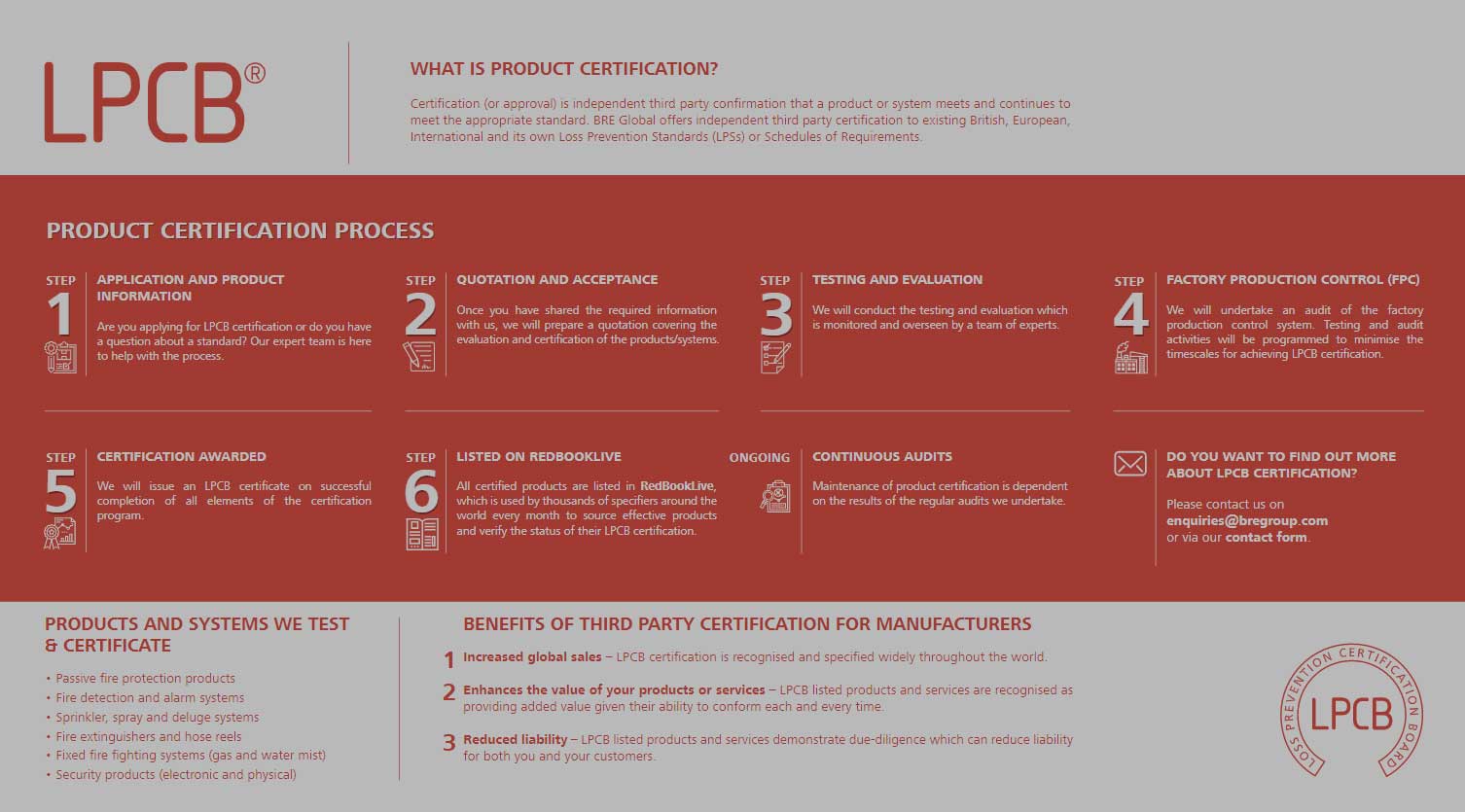 What is product certification?

Find out more about the certification process

Polycab owes much of its success to its commitment to quality, combined with the ability to produce complex products on ...
Read More
LPCB Case Studies, LPCB News

The use of effective fire safety equipment is of the highest importance and is instrumental in saving lives and protecting ...
Read More
LPCB Case Studies, LPCB News

Limited testing options within Australia meant that Ampac decided the best way to achieve certification to these standards was to ...
Read More
LPCB Case Studies, LPCB News
We use cookies on our website to give you the most relevant experience by remembering your preferences and repeat visits. By clicking “Accept”, you agree to the use of all the cookies. Or visit cookie settings to customise your cookie preferences.
Cookie settingsACCEPT
Manage consent