Based in the historic St James’s Gate Brewery in Dublin 8, Diageo Ireland produces premium alcohol beverages which are enjoyed throughout the world.

Based in the historic St James’s Gate Brewery in Dublin 8, Diageo Ireland produces premium alcohol beverages which are enjoyed throughout the world. It is at St James’s Gate where Guinness, the world’s most popular stout, has been brewed for more than 250 years.  It is here that Diageo’s newest and most efficient Brewhouse is located. Diageo’s vision is to create a modern brewery to meet the highest standards in terms of technology, efficiency and environmental management.

Brewhouse No. 4 takes the form of a main two-storey block which houses the brewing tanks and vessels, an extensive ground floor process area, together with upper mezzanine areas giving access to the higher sections of the large brewing vessels. This element of the building rises to a height of about 14m to parapet level.

Flanking this main block to the east and west are a series of support functions. On the east side is the raw materials handling area consisting of a canopy and enclosure for a drive through grain truck facility to offload incoming grain into grain silos building which extends to about 25m in height. Also on the east side a block of single storey stores are provided, served by a delivery yard area. On the west side a second canopy is provided to shelter trucks serving the Delivery and Dispatch area. Also on this side are a series of large silver finish tank structures the highest being a series of four Spent Grain Tanks which rise to over 25m. The South (front) of the building takes the form of a high quality double height glazed entrance hall, including a feature staircase and lift.

The north front of the building, facing towards Victoria Quay, consists of the plain gable end of the Brew House building, but enlivened by a glazed gallery extending partway along the north face, to incorporate a ‘Guinness’ sign within the gallery space.

The building is finished in exceptionally high quality materials for an industrial building, consisting of a combination of white stone cladding to the higher elements of the brew house visible from areas external to the brewery. Matt finished dark grey flat metal cladding panels are proposed to the grain tower element, to produce a striking contrast with the rest of the building.

Diageo’s vision for the St. James’s Gate site will ensure the continuance of long established brewing activities in Dublin 8. This is in accordance with the guiding principles of the Dublin City Development Plan 2011-2017 and the Liberties Local Area Plan which seeks to retain and improve the Guinness Brewery within Dublin city. The proposed development which forms part of Diageo’s vision for the lands to the north of James’s Street have long-term and wide-reaching benefits in economic, social and cultural terms for Dublin city.

Managing sustainability is key to the future success and social responsibility at Diageo. The organisation is dedicated to improving environmental sustainability for its business and brands – from grain to glass. There are a number of in house initiatives that each contributes to Diageo’s corporate goal of maximising sustainability and best practice.

The Brewhouse uses a Combined Heat and Power Plant (CHP) to deliver power and thermal heat to the process and building services systems. The system is unique in that it uses all the electrical power and thermal capacity of the plant on a continuous basis during the process.

The building is fully commissioned, the contracting team used a considerate contractor’s programme on site and a building user guide was developed for the occupants.

Occupied spaces such as offices and control room have been provided with high quality daylight, views and natural ventilation, internal and external lighting has been designed to national best practice and partitioning systems have been designed to minimise noise transfer.

The Brewhouse energy usage and demand were designed, modelled and adjusted in order to ensure a carbon negative building. This has been best achieved through the promotion of energy use reduction by utilising the process water and innovative hydronics (water as heat transfer medium in heating and cooling). The energy profile has been delivered by the use of the following design features –

Cyclist facilities have been provided in the form of bike stands, showers and a drying room. Given the urban location, there is easy access to a number of services (shop, bank) as well as existing transport links such as light railway, buses and commuter rail station. Dedicated car parking spaces are also provided for low and fuel efficient vehicles and carpooling.

There is a considerable water use reduction over baseline with the use of low flow sanitary installations and 180 cu metres of annual rain water collected for harvesting. Pulsed output water meters are provided linked to the BMS, leak detection is also installed.

The project is a zero construction waste to landfill site as part of Diageo project goals and a compactor and baler are provided for the operation of the brew house.

The project is provided with utility glycol from an existing district chiller system for the purpose of mechanical cooling. The existing chillers have an ODP and GWP of 0, therefore there are no refrigerants in the brew house. A flood risk assessment was undertaken and the design is protected against a 1 in 200 year event, having been categorised as medium risk. External lighting is designed to national best practice to reduce light pollution and uplift.

9 out of 10 exemplar credits were achieved in the Innovation section of BREEAM. 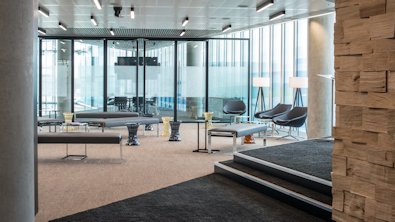