How effective are Xenon and LED VADs? The effectiveness of Xenon and LED visual alarm devices (VADs), used to warn deaf and hard of hearing people of fire, has been investigated in a recently completed research project.

The flashing signals were presented individually to 96 participants who were seated in front of a screen and occupied in a written task. The tests were performed in high and low ambient light level conditions. The devices were flashed one at a time, and from a distance of 19m were gradually brought closer to the screen until the subjects responded. The response data was processed to identify the effective illumination levels required to alert people to the flashing signals from the six devices. 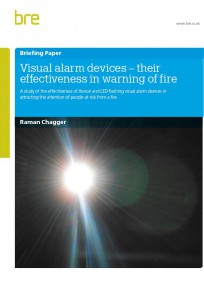 The BRE Academy also offers a range of fire safety training created by our experts, including an introductory fire safety awareness course.