From the 1990’s in response to consumer concern over tropical forest population disturbance and wider deforestation, BREEAM began to encourage stakeholders to proactively mitigate associated risks.

Construction materials often involve complex and global procurement processes and supply chains.  Within what is a dynamic and competitive international market, there is huge scope for negative social, economic and environmental activities to go unnoticed.

Historically the construction industry has lacked both an awareness of, and the means by which, to manage this.  From the 1990’s however, and in response to consumer concern over tropical forest population disturbance and wider deforestation, BREEAM began to encourage stakeholders to proactively mitigate the associated risks.

The first step was to promote consideration of the potential impacts via building procurement, focusing on the specification of timber from well managed and regulated sources.

BREEAM supported the development of the Forest Stewardship Council scheme (FSC) in 1993 and, in the following year, an FSC certification scheme was launched. This scheme was formally recognised for the first time in 1995 and has since issued over 28,948 chain of custody certificates worldwide. FSC has been followed by other international and national standards. Today legally harvested and traded timber is a pre-requisite across all of BREEAM schemes, with additional credits being available for the use of formally certified timber products against schemes that are well established and widely used across the timber sector.

But the story doesn’t end there.

The acceptance of sustainable forestry marks stimulated interest in the impacts of other materials, and so, in 2006, BREEAM broadened its scope to encourage other sectors to move in a similar direction.  Shortly afterwards, BRE Global (BREEAM’s parent company) launched its BES 6001 Responsible Sourcing standard which provided a means of demonstrating responsible sourcing across all construction materials sectors.  Project teams are awarded BREEAM credits based on the extent to which their procurement and specification choices were covered by BES 6001 (and other credible schemes). The existence of this standard has acted as a catalyst in the market and, to date, there are BES 6001 certificates across 90 organisations, spanning 28 different material types, throughout 16 countries.

Wanting to encourage a whole sector movement in this area, BRE Global specialists then contributed to the development of BS 8902, an umbrella standard launched in 2009 to provide a framework for the development of responsible sourcing schemes for individual sectors. Since then a number of sector specific schemes have been launched (the CARES Sustainable Constructional Steel scheme for example) which are now recognised by BREEAM.  Many more are in the pipeline. 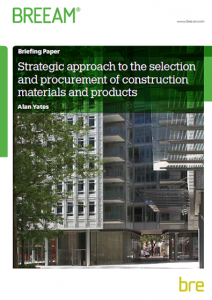 The latest initiative in BREEAM seeks to refine the ways that responsible sourcing schemes are differentiated, based on their scope and rigour whilst also recognising the complexity and variation in supply chains and impacts. This will be rolled out during 2016. Furthermore, project teams will be awarded a credit for developing a holistic Responsible Sourcing Plan which mitigates supply chain risks (termed a Sustainable Procurement plan).  The BREEAM UK New Construction 2014 scheme is the first BREEAM scheme to trial this new methodology.

In collaboration with industry and the Action Programme on Responsible Sourcing (APRES) (which is newly acquired by the BRE Group), and together with the ongoing development of the BES 6001 standard, BREEAM will continue to proactively drive the responsible sourcing agenda  through the adaptation of BREEAM  schemes as well as  broader activities.

Who knows what great leaps will be made over the next decade to further enhance ethical and environmental practices across the construction materials sector?

Click here to read BREEAM’s ‘Strategic approach to the selection and procurement of construction materials and products’ briefing paper.

BES 6001BREEAMBREEAM InfrastructureBREEAM New ConstructionBREEAM News PageBREEAM RefurbishmentBuzz BlogsBuzz NewsconstructionEnvironmentalResponsible SourcingSustainability
We use cookies on our website to give you the most relevant experience by remembering your preferences and repeat visits. By clicking “Accept”, you agree to the use of all the cookies. Or visit cookie settings to customise your cookie preferences.
Cookie settingsACCEPT
Manage consent