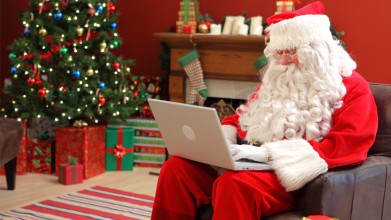 We are delighted to announce Constructing Excellence’s latest member Santa Claus Inc., the world’s largest manufacturer and distributor of toys by volume.  Santa is about to embark on a major redevelopment of his toy  manufacturing and logistics centre at the North Pole and took the decision to join Constructing Excellence in order to find out how a collaborative approach can deliver a better project.

The 100,000 square metre facility will be home to some of the latest manufacturing technologies and will be built to BREEAM Outstanding.  They also plan to use BIM Level 2, even though there is no requirement to use BIM at the North Pole, Santa has been convinced of the benefits and plans to join the Digital Construction Theme Group.  The site will be particularly challenging with hazardous environmental conditions and a requirement to keep the exact location top secret, so there might be some learning from the Nuclear Theme Group.

They’ve already visited Factory 2050 this year’s Constructing Excellence building of the year to find out how their collaborative approach led to a better building. With a growing global population Santa’s elves are under tremendous pressure to increase production and very much looking forward to working in the new state-of-the-art facility:

“All of this new technology and better working environment will make us significantly more productive, in fact a few of the guys are aiming to be done and dusted by early November so they can earn a few quid on the side in Santa’s grottos up and down the country” says Elf Don.

They hope to share experience and knowledge with their fellow Constructing Excellence members, especially Heathrow Airport with whom they hope to discuss the best approaches to building runways.  Although Santa acknowledges that flying reindeer and sleigh require a much shorter runway and performs better in the snow and ice than your average aircraft.

Santa’s logistics company Rudolph & Co Red Nose Logistics have signed up to CLOCS (Construction Logistics and Community Safety) to improve the ‘Elf & Safety’ of transport to and from the site.  Rudolph has long been a proponent of the use of high vis in transport pioneering the use of his ‘nose so bright’ to guide Santa’s Sleigh on Christmas Eve.  Indeed, this unique approach gained him recognition amongst all the other reindeers who stated ‘Rudolph the Red Nose Reindeer you’ll go down in history.’

Given that it’s pretty dark and dim at the North Pole for 6 months of the year Santa’s going to pop along to the Sustainability Theme Group at the end of January  to find out about approaches to delivering healthy buildings.  ‘Particularly in January when we get the rush of Christmas out of the way we tend to get a low productivity and high levels of absence with the elves and with all those toys to make for all those children we really need to maximise production in January.” Says Mrs Claus, Santa Inc’s Head of Operations.

Santa and the team are aiming to become very active members of Constructing Excellence and aim to attend working group meetings and member forums throughout the year.  “We are very happy to host site visits here at the North Pole, but you might need to pack your thermals” says Santa Claus, founder and CEO of Santa Claus Inc.

Works will commence early in the New Year with a view to completing in spring 2018. The team hope to triumph at the Constructing Excellence Awards in 2018.