In 1995 I moved to Johannesburg. Hailing from the Frozen North it was quite an eye opener, from a climate and life experience point of view.

Not for the faint hearted

I certainly don’t regret living there, but it was a frightening place to be. Burglar bars on doors and windows, armed response at the push of a (panic) button and not stopping for red traffic lights at night.

I initially lived in an apartment close to Hillbrow, a notoriously drug-filled and unsafe place. In past years it was a common sight to witness fridges and washing machines being thrown out of windows from a great height… I did say it was not for the faint hearted…

As in many cities the privileged, and not so privileged, live cheek by jowl – many years later Nelson Mandela died at his Johannesburg home in an affluent suburb a few streets away from Hillbrow.

Near my apartment was Ponte City – the tallest residential building in Africa at 185 metres high. Every night my constant companion was the flashing of Coca Cola lights beaming down from the top of Ponte.

Ponte was built in the 1970s, as a luxury apartments for white people only.

Over the decades, as many people decamped to the suburbs, Ponte became overrun by drug dealers and gangs. It was dubbed “suicide central” because it was a good place to end life by hurling off the top of Ponte.

By the late 1990s there was talk of turning Ponte into a prison. But in 2001, it began a journey to redemption. The developers promised purpose-built bachelor pads (complete with raised and revolving beds).

However, the dreams were quickly dashed. The initial fantasies never came to fruition eg an indoor ski slope. It began a descent into infamy and decay. The building’s centre space became a disgusting dumping ground.

I visited an exhibition about Ponte curated by Mikhael Subotzky and Patrick Waterhouse a couple of years ago.

I was particularly fascinated by the photographs of the debris found at the bottom of the cylinder – the tower’s trash dump. Dead cats, nappies, photographs and documents (and plenty of nasty “things” I won’t go into).

Ponte has now been renovated and black professionals have moved in. A few white people have too. North-facing windows offer an amazing view, including the FNB stadium that hosted the 2010 FIFA World Cup. 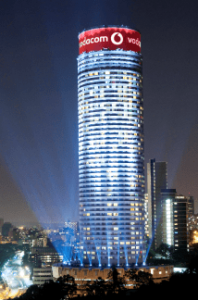 It is still one of the most dangerous parts of town. But I am pleased something good seems to be happening there… but I won’t be returning to live there – I don’t fancy living in a prison again or being bathed in flashing lights every night.