Blogging is a strange occupation. One idea leads to another and before you know it, the blog takes on a life of its own and appears before your eyes. A bit like painting a picture.

I can’t remember where I got the idea for this blog, but it has definitely grown legs.

Men. Sheds. Caves. Many men need a place to “be”, somewhere to do “man” things like tinkering with machinery, sawing bits of wood, listening to what they want to listen to and being as messy as they like. Now this is a stereotype, I know, but there is some truth in it.

When is a cave not a cave?

It was a surprise to me to find out that that early humans did not permanently live in caves. They did a lot of painting on the walls of the caves, used them as a sacred space and sometimes sheltered there.

So what did they live in?

Well because they had to move around to benefit from seasonal food such as animals, fish and grains, they built structures made of wood and stone. 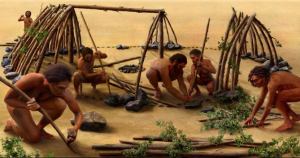 You can still find the tools they used to kill animals if you know what to look for.

Anyway, back to men and their need for a cave. OK, a shed at the bottom of the garden is a good start but what about a truck transformed into a man cave? It includes a fully working kitchen, a sleeping loft, a bathroom, and a shower. And it’s offgrid so cheap to run. It’s a version of an earthship (on wheels). 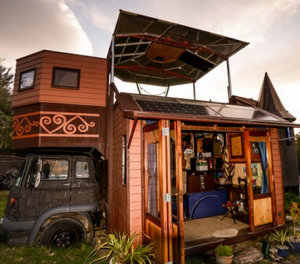 This is a man cave with a difference – it’s also a fantasy castle. A bit over the top for my taste, but hey each to his own.

Another option is to join other men in Men’s Sheds – a larger version of the typical man’s shed in the garden – a place to feel at home and pursue practical interests with other men.