University College of Estate Management (UCEM) has showcased its commitment to sustainable construction by refurbishing its new premises to the highest levels of sustainability.

University College of Estate Management (UCEM) has showcased its commitment to sustainable construction by refurbishing its new premises to the highest levels of sustainability – achieving a BREEAM Excellent rating.

UCEM, the leading provider of supported online learning for Built Environment professionals, placed the BREEAM assessment criteria at the heart of its refurbishment plans. This enabled the university college to secure one of the highest scores recorded under the dedicated Refurbishment and Fit Out Scheme in the UK and the highest in the education sector, since it was introduced in 2014. 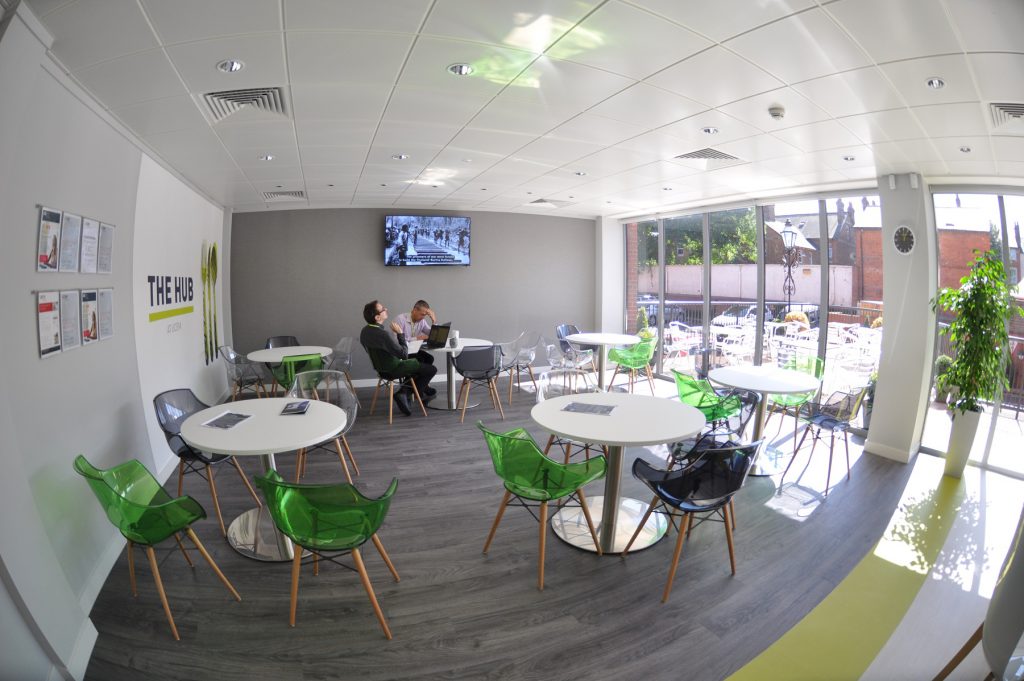 UCEM Principal Ashley Wheaton said: “After more than 40 years of occupation at Whiteknights we saw the move as a significant milestone in our history, reflecting our independence as an academic institution with our own degree awarding powers and progression to full university college status.”

Wheaton and his management team agreed on three criteria for the new headquarters: the new home should be in Reading; UCEM wanted to own and not lease its new home; and UCEM had to be operational in its new home by the end of July 2016. There was an extra, unwritten but vital, proviso: create a building that was environmentally sustainable and fit for the future. 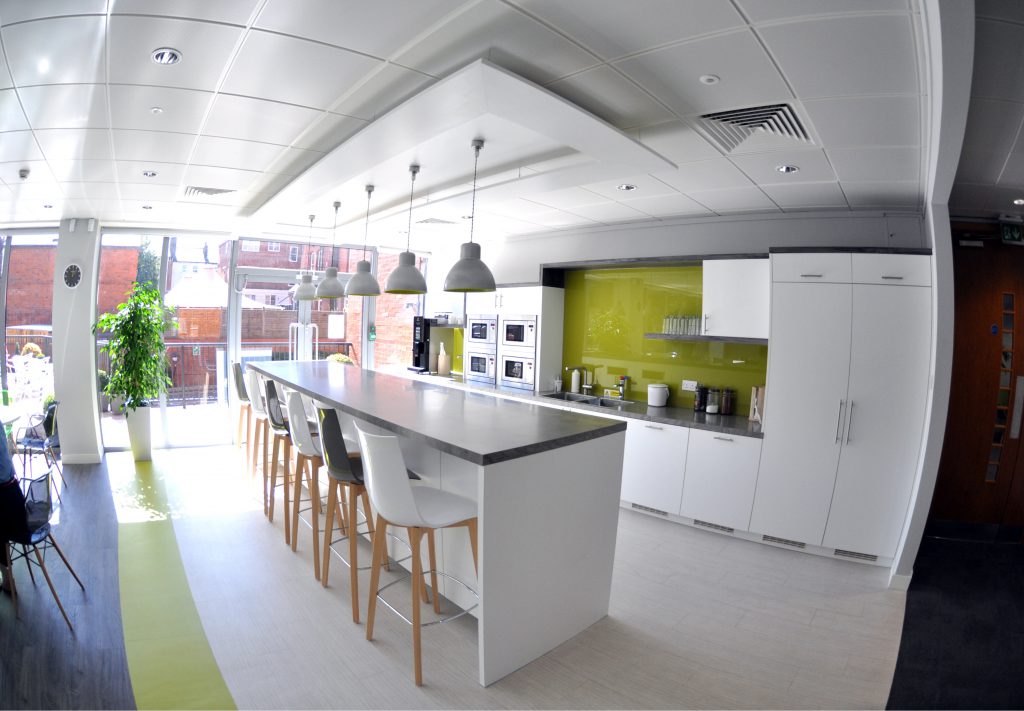 “It was part of our culture,” added Ashley Wheaton. “If we were going to include environmental sustainability in our core curriculum, then we had to ‘walk the walk’ in our own ethos and operations.”

After an intensive and sometimes frantic search, the team discovered the building at 60 Queen’s Road in Reading. The three storey 1980s building had potential and with contracts exchanged in August 2015, acquisition was completed in December. However, it was not until January 2016 that site work for full refurbishment and fit- out works could begin.

“Even though we were up against deadlines we wanted to achieve the best in sustainable design and technology, so we looked at BREEAM accreditation as a model for achieving our goals. The next step was assembling a team that would bring all of the elements together, from sourcing materials to applying energy efficient technologies and recyclability,” added Wheaton. 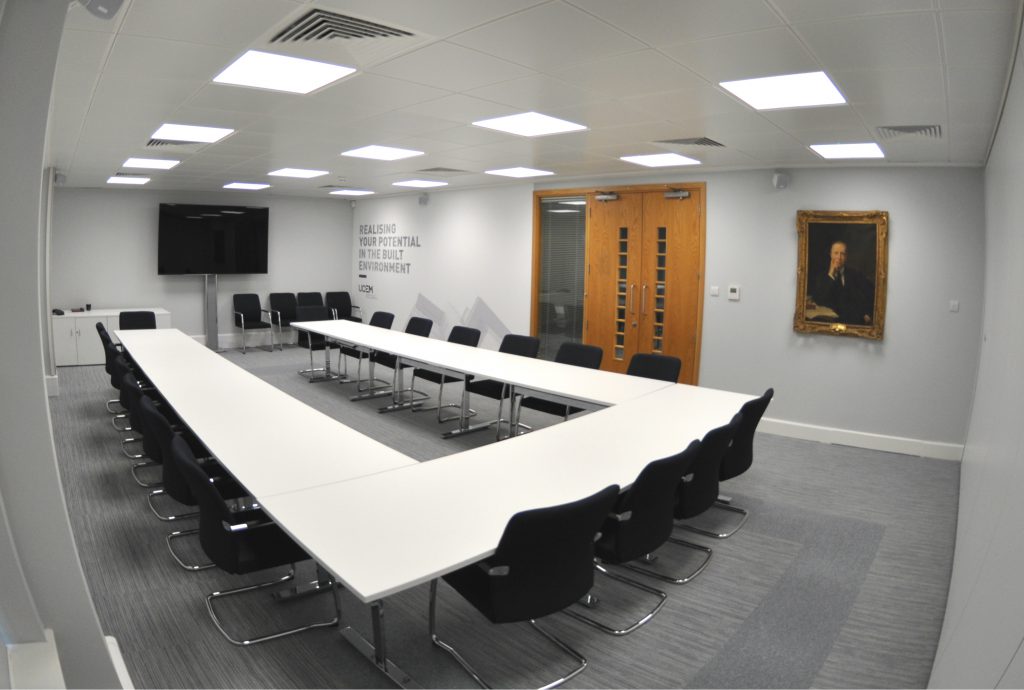 Joe Croft, project manager at Overbury, said: “With a total area of 2,118m2 the project aimed to be one of the few certified to BREEAM’s Refurbishment and Fit Out Scheme 2014 – including new aspects such as direct recycling of waste from site back to manufacturer. The client wanted to demonstrate international excellence in sustainable refurbishment to both students and academia, with the aim of influencing future best practice in industry.

“But we were also in no doubt that it was a difficult 1980s building with which to achieve high performance standards to get to BREEAM ‘Excellent’.”

Anna Scally at GVA concurs: “We knew the deadline was a tall order, which necessitated total team cooperation at all levels. BREEAM became a way of working that was all-inclusive and proactive.”

Each step in the fit-out was meticulously documented, recorded and assessed. From the transport of materials from the factory gate to the building site, storage and distribution, to providing KPI sheets confirming monitoring – the recording and reporting of transport of construction materials and waste accommodation – and total fuel consumption and carbon dioxide, all were to be included in the BREEAM evidence.

Added Joe Croft: “The deadlines certainly made us and the contractors think. We even looked at pre-assessment of materials before tendering, which gave us a distinct time advantage. But it was the client’s enthusiasm that drove the entire process right down to weekly reporting meetings.”

“Now magnify that process of recording and reporting across the entire fit-out process and you get an idea of the scale of the task over just six months,” continued Joe Croft.

And it was not just the, in many cases, unseen elements of sustainability. The building also incorporated a biophilic and natural design ethos, of ‘spaces designed with the human in mind’.

UCEM moved into its building in July 2016, an incredible feat given the time and material constraints, ready for an official launch in September. Reports from the occupants are favourable. “People love the new premises,” said Wheaton, “and the feedback we’ve received from visitors has been magnificent.”

Already the building is showing advantages, with extra capacity from the 38 photovoltaic panels already being sold back to the grid and the cloud computing software cutting down on computer usage and ‘vampire’ electric dead time.

Continued Anna Scally: “I don’t think we’ve worked on such an ambitious project, especially where reporting and assessing was an ongoing process. But without the BREEAM methodology, I think the whole process would have fallen apart.”

Ashley Wheaton agrees: “Yes, achieving a BREEAM score was great but I think it was the icing on the cake as the BREEAM methodology really showed us what was capable. I can honestly say that the new building is a showcase for renewable technologies and a testament to the involvement of everyone on a journey to sustainability.”

BREEAMBREEAM NewsBREEAM News PageBREEAM RefurbishmentBuzz News
We use cookies on our website to give you the most relevant experience by remembering your preferences and repeat visits. By clicking “Accept”, you agree to the use of all the cookies. Or visit cookie settings to customise your cookie preferences.
Cookie settingsACCEPT
Manage consent